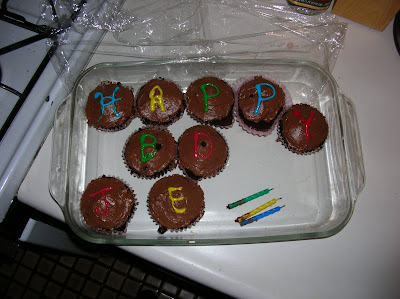 I had a rough day yesterday. I love my birthday, and every year I celebrate it. But this year I just wasn't into it. Things have been sucking so much lately that it just didn't seem to matter. I have not been in the mood to celebrate much of anything. I didn't feel well most of the day and then last night I got home from work and I was just so sad. Dealing with this diagnosis has proved a lot more difficult than I thought it would be, despite the fact that I've been anticipating it for a long time. It's just that I didn't even really know what Crohn's was up until a few weeks ago and it's turning out to be a lot scarier than I ever would've thought. I'm fortunate in that my symptoms are not as bad as they could be. I've caught it early and am taking care of it before it gets out of hand and that's good. But yesterday I just got to the point where I needed to cry and I did. And it felt good to let it out. Then I went to kickboxing and did ab work and it hurt. It really hurt and I just didn't think I could make it through the class but there's no can't, only won't and I'm not a quitter! I stuck it out and actually found that aside from the weakness in my abs, the rest of me is actually getting stronger. I was able to do full splits on both sides and I did all 3 rounds of the iron bridge. I have never, in over a year I've been taking this class, been able to complete all 3 rounds of the iron bridge! Steve even commented on my "impressive" splits. By the end of class I was feeling so much better. I walked home around 9:30 and went into the house through the kitchen and my roommate comes around the corner carrying a dish full of cupcakes with candles lit and says "Happy Birthday! I made you cupcakes and they're gluten-free!" I almost fell over, I was so excited. It meant so much to me. And they were good! She got a box mix from the health food store but I can't remember which one. She even made lactose free frosting!! I've never had cupcakes that tasted so good, just because they were so important to me. It just made my entire day.

Today I feel really good. It's a beautiful day, I walked to work with a huge smile on my face and gluten-free cupcakes in my backpack to share with my Dad and Brother. I have to say, that a day later they are not as good but I'm not surprised, I know that GF stuff doesn't last long so I'll make sure they're all gone today(I already had one for breakfast). I just know that although sometimes it will be challenging, it's manageable and it's gonna be ok.

I also just want to say how incredibly difficult it's been to not be able to log into CK and check in on my girls. I miss you so much!!! Thanks for the comments and birthday wishes!
Email Post

Cynthia said…
Wow that was really awesome of your roommate!! It sounds like it was just what you needed at the end of a sucky day! I am glad someone came through for you! :) ps we miss you too!
May 29, 2008 at 1:00 PM