And more thoughts about brownies... 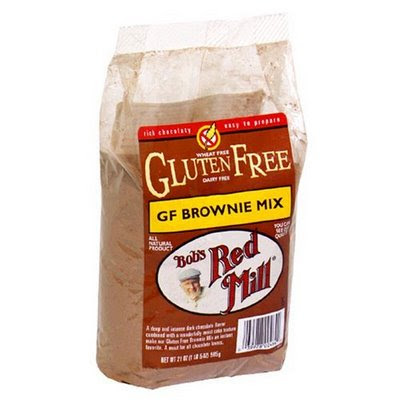 I know, this is at least my 3rd mention of brownies this month. I'm sorry, apparently that's all I can bake these days! What can I say, they are quick and easy to make and I clearly love them. Last night after I failed at tried making salmon cakes, I decided to whip up the Bob's Red Mill GF Brownie mix that I had received in my goodie bag at the cooking spree. So far I have made them from scratch, tried the Trader Joe's mix, tried Foods by George pre-made version, and now trying Bob's Red Mill. This mix required one and half sticks of melted butter (!!) and in the finished product you can definitely taste it. I like these brownies, but they're more like cake. I'd definitely put frosting on them and serve them up that way. As far as brownies go, I'm still sticking with the from-scrath version or Trader Joe's mix. Here's a rather unflattering picture of them. See how dense they are? These two were from the center of the pan, definitely more gooey than the edges, but still like cake. I just ate one, I don't like the after-taste. I won't buy this mix again. Sorry Bob!

As for the salmon cakes, well I made them according to Tonya's blog comment but I made a few executive chef decisions that I don't think I was supposed to make. 1. I drained the water from the can. 2. I used a smaller can than I think I was supposed to. And so I had over-cooked, dry piles of corn meal filled with onions and a little bit of salmon. I ate them anyway, and they weren't so bad! Of course now my house smells like fish, which reminds me why I never cook fish inside the house. Oh well. At least I got to use my can of salmon, which interestingly enough smells just like tuna, and so I will probably use it more like Kath does, for lunch and stuff. Much better than the canned crab experiment. I'm also now paranoid that my clothes smell like fish since my bedroom is right next to the kitchen...

But hey, it's FRIDAY! Three cheers for the weekend.
Email Post